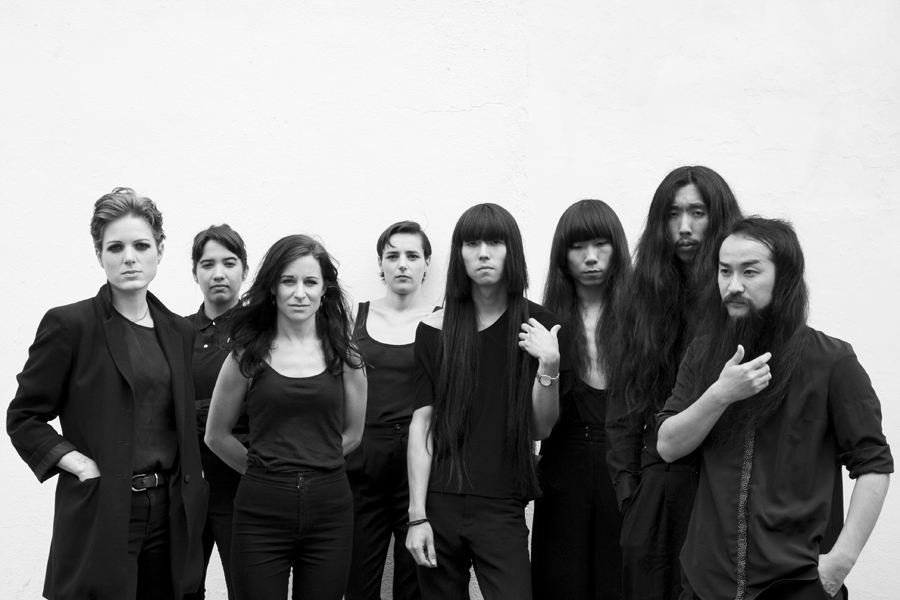 Bo Ningen and Savages announce a collaborative recording as a co-release by Stolen Recordings / Pop Noire Records on November 17th. ‘Words To The Blind’ comprises of one 37-minutes long track. Taking their cross fertilisation a step further, following occasional live appearances together and Savages’ Jehnny Beth guesting on Bo Ningen’s current album ‘III’, ‘Words To The Blind’ is an astonishing piece of work, a ‘simultaneous sonic poem’ inspired by the Dadaist concept of the ‘Simultaneous Poem’.

Gemma Thompson of Savages explains the ideas behind the recording further:

“Zurich in 1916 and Hugo Ball is instrumental in creating the Cabaret Voltaire – a club which will become central to the performances of the Dada movement, during which the artists would experiment with forms of sound poetry and simultaneous poetry. A movement created through the horror of World War One, it attempts to understand how society has reached such an illogical decision. Through simultaneous poetry begins the attempt to delve into chaos and maelstrom, to find the voice of the individual struggling to be heard.

London in 2012 and Savages are recording the debut album ‘Silence Yourself’, in a secluded studio in the North West of the city. In the middle of an intense three weeks, we set out one evening to see the band Bo Ningen play at Cafe Oto. A few days later producer Johnny Hostile begins to muse over the possibility of two bands playing in the same space at the same time. Concurrently I am reading about the performances at the Cabaret Voltaire. We decide to approach Bo Ningen with the idea of collaborating on a ‘Sonic Simultaneous Poem’.

As the idea begins to take shape in early 2013, we prepare for both bands to rehearse together in a studio with a loose composition based around five chapters.

As the musicians of both bands consider how to apply themselves with their instruments to each chapter – revolving, colliding and intertwining with words sang in Japanese, French and English by Taigen and Jehn – we also envisage the physical space in which to perform.

We imagine a stage in a large u-shape to contain as much of the audience as possible in the centre. The two drummers next to each other at the ‘bottom’ of the u, then leading around symmetrically (facing each other): guitarists, bassists and singers at the tips of the u-shape. Bo Ningen have a guitar extra, so we hang one from the ceiling to hit as you would a gong. Eventually we fix a date and a space for what we believe is a one-off performance that we name WORDS TO THE BLIND.”

Performed originally at The Red Gallery, London on May 29th 2013

Bo Ningen and Savages will perform ‘Words To The Blind’ again together this November with the support of the Barbican. The show will take place at the Oval Space, London on Wed 19 November.