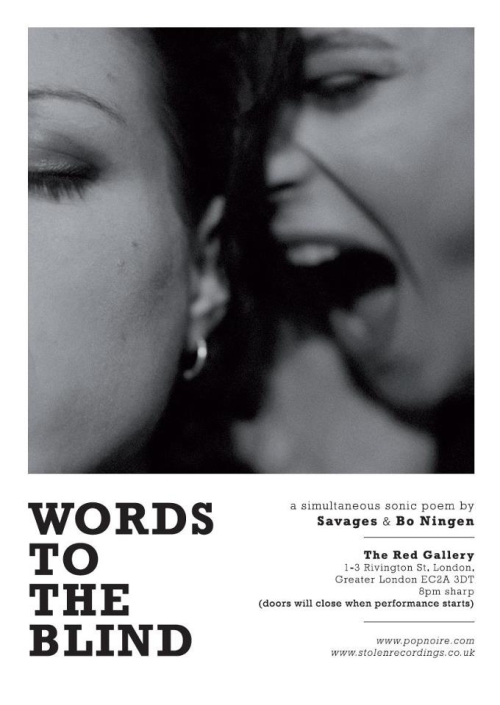 London bands SAVAGES and BO NINGEN are teaming up to write and perform a SONIC SIMULTANEOUS POEM entitled ‘WORDS TO THE BLIND’ at THE RED GALLERY – on May 29th.

This is an EXCLUSIVE PREMIERE of a unique EXPERIMENTATION inspired by the early DADA concept of SIMULTANEOUS POETRY – a situation where poems are recited simultaneously onstage in different languages “in such a way that the resulting combinations account for the total effect of the work, ELEGIAC, FUNNY or BIZARRE” quoting the leading Dada artist Hugo Ball.

THE SONIC SIMULTANEOUS POEM alludes to the purpose of bringing a solitary voice back to itself. The voice and sounds become immersed and must fight to be heard, and fight to find their path. The ineluctable rhythm and noise of the world threaten to destroy the individual, but it shows resistance. The figure stands amongst the cacophony.

NOTES :
No entry after performance starts.
The event is likely to be filmed – we will kindly ask the audience to not film or take pictures of this event with their phones or cameras.
Tickets wont be available on the door so please buy in advance.
Ear plugs will be supplied.